Your tickets will be available before the show at WILL CALL-- Don't miss Jeremy Davis and his Fabulous Equinox Orchestra in their triumphant return to their home of Monroe, LA. This show will feature the entire big band plus Clay Johnson & Adam Jones!
ULM Campus Brown Auditorium
Monroe, Louisiana
Questions? Contact Event Organizer
Selected Tickets
{{m}}

Your tickets purchased through TicketRiver.com will be at WILL CALL before the show.

--Live from Savannah , GA , raised in the Louisiana Delta and now performing across the nation, Jeremy Davis is proud to present his Fabulous Equinox Jazz Orchestra. Don't expect a concert or a jazz recital, but a one-of-a kind, high-energy stage show featuring some of the best entertainers and musicians the industry has to offer. Their fresh approach to the Great-American Big-Band revival developing across the nation is revolutionary, and their success has developed from several key elements: Jeremy Davis, Band-leader: As a business professional and phenomenal tenor sax player, Jeremy has surrounded himself with only the best and most professional musicians. His enthusiastic vision and determination has created a product that wows the young and old alike, meeting and surpassing all audience expectations. Hoppy Hallman, Arranger: This world-class musical director has worked with such notables as Connie Frances, Vanessa Williams, Gene Barry, Rosemary Clooney, Wayne Newton and has produced music for several Disney films and hundreds of other well-known projects. Now, Dr. Hallman works with Jeremy to develop fresh and exciting new versions of standards from the Great American Songbook. Clay Johnson, Singer: Raised in a family of Southern Gospel singers, Clay was born to entertain. his life long friendship with Jeremy brings a magic to the stage that is born from hundreds of "on the road" shows for many years, where together they learned how to entertain and engage audiences.Jeremy Davis and the Fabulous Equinox Orchestra perform more than jazz, more than a big band, they put on a show. In his own words, Jeremy describes the band as, "The Rat Pack meets The Dean Martin Variety Show with a touch of A Prairie Home Companion. It's plain to see that we love what we do, and we love our fans. We're not your grandfather's big band." 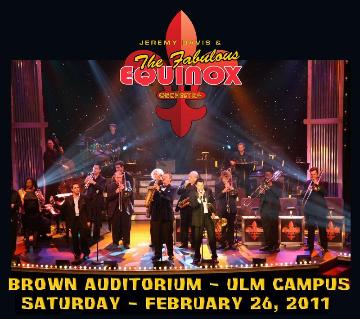