A night of rock and roll
The Attic
Livingston, Montana
Selected Tickets

Buzz Cason is a legendary artist, producer and songwriter. He wrote "Everlasting Love" and his songs have been recorded by the Beatles, U2 and Pearl Jam. He has also co-written, recorded and/or performed with a wide range of artists, from Elvis Presley to Buddy Holly to Jimmy Buffett.

"One of the most gifted creative artists I have known, Buzz Cason made it as a performer, recording artist, writer, producer, and publisher, and he did it with grace, good humor, and true humility that shines through these stories of his life."?— Kris Kristofferson

Robert Cline Jr. began his music career as a collaboration with members of The Subdudes,both in the studio and on stage. John Magnie, produced Cline’s debut album “All The Right Reasons,” which was released in March 2012. Cline recalls, “John and Steve Amedee really took me under their wing and have been an amazing source of support and inspiration”. Cline has performed solo and as a band with musicians such as: Buzz Cason, John Magnie, Lisa Morales, Shelley King, Mike Blakely, Walt Wilkins, Susan Gibson, Dustin Welch, Michael O’Connor, The 3 Twins, The Drive-By Truckers and many more. Cline has recently relocated to the Shoals where he wrote and recorded his second album, American Mojo, at the Nutt House Recording Studio in Sheffield, AL. 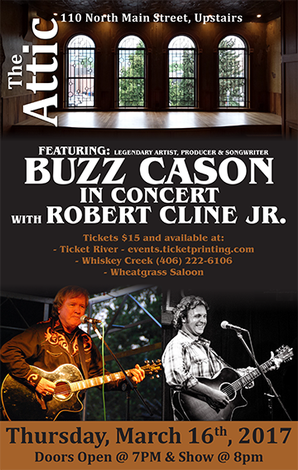