Divas with Michael Andrew in Concert

The Steinway Society of Central Florida presents the 6th edition of its popular fundraiser, DIVAS, WITH MICHAEL ANDREW IN CONCERT on Sunday, August 18, 2019 at 5:30 pm at the Orlando Museum of Art auditorium, 2416 N Mills Avenue, Orlando, FL. Singer and bandleader Michael Andrew returns along with singer Miss Jacqueline Jones, Linda Cole in a tribute to Nat King Cole, and Valerie Gillespie. The fundraiser is in celebration of the 12th anniversary of the Steinway Society and 30th of the Steinway Piano Galleries.

The event includes a cocktail reception at 5:30 pm, followed by the concert 6:30 – 8:30 pm. Tickets are $75 ($65 for Steinway Society members) and $100 for reserved VIP seating. The event includes heavy hors d’oeuvres and cash bar, with a silent auction.

The singers are backed by pianist Michael Kramer, show producer, and his Swing State band.

Michael Andrew has been headline singer and bandleader at the Rainbow Room atop Rockefeller Center in New York City and hosted a radio broadcast, “Live from the Rainbow Room.” He was bandleader and singer at Merv Griffin’s “Coconut Club” in The Beverly Hilton in Los Angeles. Andrew performs often as a guest artist with orchestras across the country and with his own orchestras SWINGERHEAD, THE ATOMIC BIG BAND, and the GERSHWIN BIG BAND.

Michael Kramer has lived in Central Florida for over 30 years. He has been an accompanist and arranger for performers such as Michael Andrew, Frank Wess, Jacqueline Jones, Ira Sullivan, Rick Fay, and Linda Cole. He has worked with Bobby Rydell and Julius LaRosa; has played with the Cab Calloway and Nelson Riddle Orchestras; and has toured with the Gershwin Big Band. 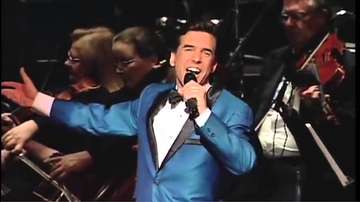