John PIzzi is one of America's premiere ventriloquists. Besides
being a favorite at America's top resorts such as The Riviera and The
Tropicana in Las Vegas, he and his "partner" Andy have appeared on
NBC’s America’s Got Talent, America’s Funniest People, Good
Morning America and The Daily Show on Comedy Central. John is
also in demand as an opening act where he regularly works with stars as
Joy Behar, Clint Holmes and Pat Cooper.
He’ll trick you... He’ll fool you... He’ll use and abuse you... But
you’ll be back for more. Don’t miss the chance to see this fantastic act
in action!

Mike Speirs’ quick, candid wit is his hallmark. A self-confessed former
party boy, he now finds his hell-raising days are becoming a distant
memory as he turns to a fresh and funny look at the realities of being a
grown-up. There’s the joy and pain of teaching social studies in public
school... the big scare of open-heart surgery... and wistful reminiscences
about striking out with women in the glory days. Mike’s life is a running
reality check, and he gives his honest take on being the guy he is.
Mike has been seen at the best venues on the East Coast including
Turning Stone Casino, The Comedy Works, Bananas Comedy
Club, Catch a Rising Star and The Comedy Connection. Mike was
also recently featured at The Great American Comedy Festival at The
Johnny Carson Theatre in Norfolk, NE.
You’ll like Mike. You’ll love his humor.
Brad Trackman is a NYC comedian with universal appeal. He has
made national television appearances on CBS' "The Late Late Show with
Craig Ferguson," "Comics Unleashed" with Byron Allen, AXS TV's
"Gotham Comedy Live," NBC's "Later," "Friday Night," CBS's "Star
Search" with Arsenio Hall, ABC's "NY Comedy Festival," Metro TV's
"New Joke City" hosted by Robert Klein, Comedy Central's "Heroes Of
Jewish Comedy,” “Stand Up Stand Up" and MTV's "The Buried Life."
Trackman headlines around the country playing the best venues such as the
DC Improv where he recorded both of his CDs ("Safecracker" and "Cool
Guys Don't Wear Pink"). Both CDs have received critical acclaim and were
produced by SiriusXM Radio's comedy program director, Joel Haas. If
you're wondering what makes Brad such a unique comedian, it's his versatility
and ability to absolutely KILL while working squeaky clean. That's why
"Radio Shack" had Trackman headline the "Net Together Concert" in Times
Square (and simulcast in San Francisco) with a 20-foot tall jumbotron behind
him and a crowd of 5,000 in front of him. Trackman has opened for Dana
Carvey, Joan Rivers, Robin Williams, Damon Wayons and Weird Al
Yankovic.
Contact Event Organizer 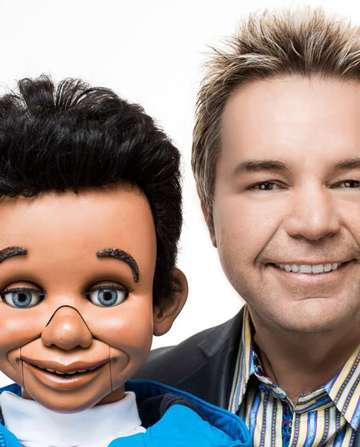